Blog
You are here: Home1 / Blog2 / Uncategorized3 / When are Supplements Necessary

It’s a tough world out there. Our air and water are often full of toxic chemicals and many of our food choices are less than nutritious. Most of us have highly busy lives and devote too little time to being physically active. Despite the fact that nearly 7 out of 10 Americans are overweight to obese, we are ironically often under-nourished. In fact, up to 90 percent of Americans are lacking key nutrients in our diets. -i

Ensuring we are getting the nourishment needed to support our bodies optimal function can be a challenge, but nutritional supplementation can help fill in those gaps that exist in just about everyone’s diet. Countless research studies and health experts agree that supplementing with key nutrients, including a multivitamin, adequate vitamin D, and omega-3 fatty acids provide a good nutritional foundation.

To understand the relationship between supplementation and long-term health, a first-of-its-kind Landmark Studyii was conducted in collaboration with researchers from the University Of California, Berkeley, School Of Public Health.

Researchers gathered a group of Shaklee long-term (20+ years) multi-supplement users and compared their health to non-supplement users. Results were adjusted to account for a number of potential confounders, including age, sex, education, income, and body mass index (BMI).

The dietary supplements consumed on a daily basis by more than 50 percent of the multi-supplement users included a multivitamin/multimineral, B vitamin complex, vitamins C and E, antioxidants, calcium with vitamin D, omega-3 fatty acids, probiotic, soy protein, glucosamine and an herbal immune supplement.

In most cases, the single supplement users’ health markers fell between these two groups, suggesting that multiple supplementation use was both safe and effective. 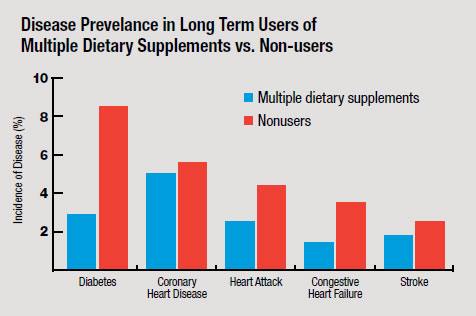 Want to join the discussion?
Feel free to contribute!

Learn about the amazing benefits of membership. Leave me your name and email address and any questions you may have below!